Above: Salisbury, capital of Rhodesia, in late 1977 looking south west.

The wooded Kopje may be seen in the middle distance just below the power station cooling towers. The recently completed Earl Grey Building housing government offices is prominent in the centre foreground. The Monomatapa Hotel faces Salisbury Gardens to the right just in front of Livingstone House.

Below: as it was less than 90 years before.

Note the Kopje to the right from which many views of Rhodesia’s capital have been taken down the years.

One of the first houses in Salisbury as lived in by the early pioneers.

The materials used can clearly be seen: poles and dagga (dried mud) with a thatched roof.

Salisbury in 1895; Pioneer Street in the foreground

Salisbury in June 1896 – click on picture for a closer view.

Salisbury from Jameson Ave looking towards the Kopje, 1903.

This is a similar view to that shown in the second photo just 13 years before. The cathedral/church is at centre left.

(Take a closer look by clicking on the picture.)

An interesting print of the capital a few years later in the early 1900s giving an impression of life at street level.

Salisbury, Rhodesia from the Kopje 1912

The amazingly rapid progress of civilistion is striking when compared with the first pictures at the top of this page taken a short 24 years earlier.

Manica Road was the principal business and shopping street at this time.

First Street slowly grew in importance and became predominant from about 1950 onwards.

One of the wards, Salisbury Hospital 1923

Apart from more buildings, the main point of note is the large number of trees which have been planted.

Meikles Hotel, Salisbury, Rhodesia facing Cecil Square at the bottom right – view from the air in the early 1950s.

City of Salisbury, capital of Rhodesia in 1974

Salisbury was founded in 1890 when it was chosen as the site for Rhodesia’s future capital. The Pioneer Column halted here on 12th September and the next day the Union Flag was formally raised. The settlement was named in honour of the then Prime Minister of Britain: Lord Salisbury. The settlement grew into a town and in 1935 it was granted the status of a city. The city lies at an altitude of about 1 472 metres / 4,829 feet above sea level.

The next two photos were taken from the top. 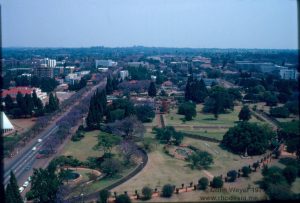 Looking North over Salisbury Gardens from Livingstone House before the rains.

Montagu Avenue, Salisbury as painted by ME Halford 1932

(Marguerite was known to family & friends as “Daisy”)

below my own photograph from 1977