The passing of the age of the horse is well illustrated in this interesting photo from 1915 which also typifies the empty nature of the land then found north of Salisbury. 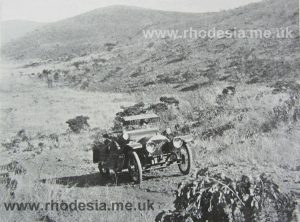 A colonial model Napier owned and driven by Mr A.C. Henderson of Mazoe.

(Click on the picture, and then again, to get a closer view)

The picture was taken during one of the weekly journeys which Mr Henderson had to undertake to a spot on the then famous Rhodesian hill known as the “Golden Stairs”, in those days many miles from the nearest habitation. The hill in question is over a mile in length, with an average rise of 1 in 4 and, in parts, steeper.  The picture was taken some time in early 1915 or possibly in 1914.

The Napier was a high quality car comparable to a Rolls Royce or Lanchester.  VCC experts have identified the car as most likely a 4 cylinder 2.9 litre model from 1911 or 1912 .  In those days of rough unsurfaced roads, such as can be seen in the photo, many better makes of British car offered a colonial model which had a high mounted chassis giving greater than normal ground clearance.  Some makes, such as Sunbeam, also fitted thicker radiators to handle the warmer conditions found in many parts of the British Empire.

Possibly, more recent residents of Salisbury may have wondered where the Golden Stairs Road through the northern suburbs actually led, well, this is it!  Originally the main road to Mazoe ran via Mount Hampden but there was an alternative track which went from Mount Pleasant to fall steeply into the Mazoe valley by way of the Golden Stairs, a series of rough descents about 16 miles, or 26 km, from Salisbury.  This slightly shorter route is, more or less, that followed by the main road today.

Before European settlement there were no roads, bridges, railways or any other aid to getting about what was to become Rhodesia. There were merely tracks made by wild animals and natives on foot, of whom just a few hundred thousand of the latter were scattered about the country in small communities. Before the arrival of the white man they had not yet discovered or made use of the wheel. In the early days of settlement travelling to Rhodesia and within the country was painfully slow. For an account of travel in the pioneer days of the 1890s use the link.

Until Rhodesia introduced its innovative strip road system in the 1930s, all roads outside the towns throughout Africa were no more than dirt or, at best, gravel surfaced. This meant that speeds were necessarily slow and during the rains even slower! But, more than anything, the real handicap to road travel in the early part of the 20th century was the lack of bridges. All rivers had to be forded across what were, and still are, known as drifts. However during the rainy season, which typically lasts from about November to March, these could become impassable in the space of a few hours and could remain blocked for many days.

Here is an example of what the traveller had to live with in the days before bridges.

This shows the Hunyani Drift at Sinioa in the dry season c 1925. A car can be seen carefully making its way across.

This photo shows exactly the same view in the rainy season.

The problem is clear!

The Victoria Falls Bridge over the Zambezi was the first major bridge to be built and was completed in 1905 as part of Cecil Rhodes’ Cape to Cairo railway project. To begin with it carried only railway traffic but, as road traffic increased, it was altered to allow motor traffic to cross from 1930.

Apart from the above which, as said, was rail only until 1930, no high level road bridges were built before the Great War.  It was only after the grant of self-government in 1923 that matters really moved forward. The new government of Sir Charles Coghlan started a programme of bridge building which, to begin with, consisted of low level bridges. Although still subject to flooding after heavy rains, budget constraints prevented the government from being able to build high level bridges.

However, by 1939 three more major high level bridges were completed which enabled traffic to pass some of the main obstacles unhindered even by the most severe floods. All three were paid for by the Beit Trust from funds left by Alfred Beit for infrastructure development in Rhodesia.

Beit was a wealthy business compatriot of Cecil Rhodes and Beit Bridge, as it is generally known, was opened in 1929 and named after him.

In 1935 the Sabi River was crossed by a bridge named after Sir Henry Birchenough who became chairman of the trust in 1930.

The Otto Beit Bridge, opened in 1939, is named after a younger brother who had taken over administration of the trust upon the death of Alfred Beit in 1906.

Apart from bridges, the other major and quite innovative achievement was the construction of a network of “strip roads”. Up until then, outside the towns even in South Africa, all roads were gravel, if you were lucky, or else graded dirt. After rain these roads were often quite a challenge and even in the dry winter season the gravel would frequently become corrugated. Rather counter-intuitively, even today on gravel roads, such corrugations run across the road rather that forming wheel grooved ruts along the road as might be imagined.

Before the Second World War the economically active white population was still relatively small and accordingly tax opportunities rather limited. Mindful of the ongoing financial constraints, strip roads consisted of two parallel strips of tar, one for each wheel of a car. These were much cheaper to build than having tar across the whole width and at that time modern double lane highways which allow cars to drive on tar in both directions were simply not required.  Given the very light traffic, strip roads were a really clever solution and on occasionally meeting an on-coming vehicle each car would simply give up one track by moving to the left and running the nearside wheels on the gravel.

In those days Rhodesia had the best roads in Africa! 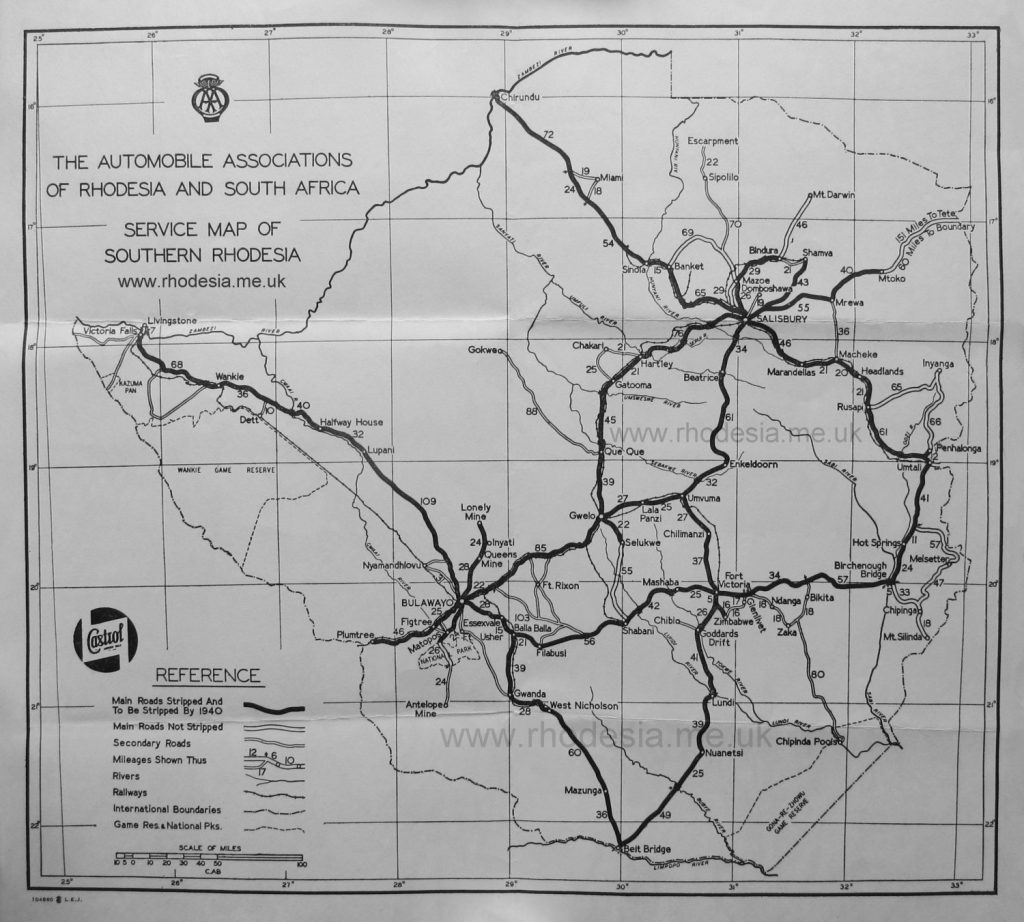 The Road “Down South” 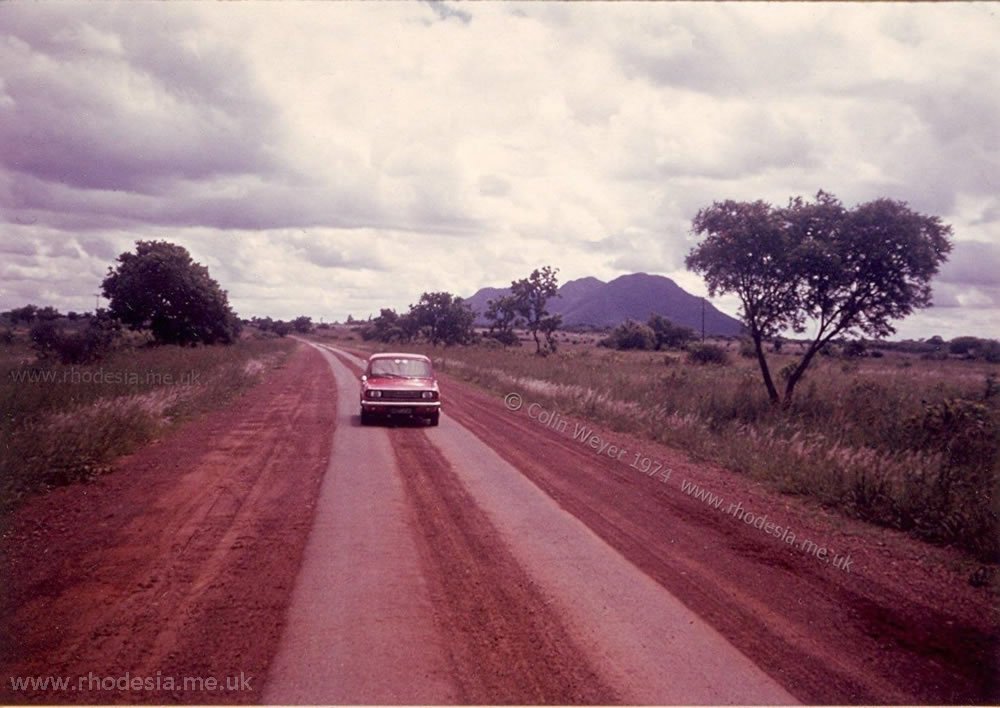 This was the main road before the new double lane highway replaced it. For most of the route the old road was upgraded but about 30 km of the road, from just north of the Tokwe River to the Zimbabwe Ruins road just south of Fort Vic, was re-aligned to the west leaving this section as it had been since the mid 1930s.

Strip roads were a Rhodesian innovation from the 1930s and provided work during the depression as well as all weather roads at an economic price. This led to the best road network in Africa at a time when even South Africa had only gravel and dirt roads. In the event of meeting the occasional car the rule was to move to the left so that the offside wheels would run on the left hand strip and the others run on the gravel. 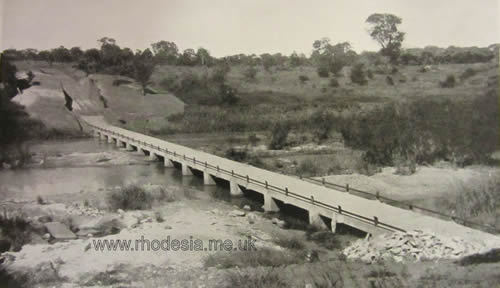 One of the key bridges on the road to South Africa and the first to be crossed after leaving Fort Victoria. 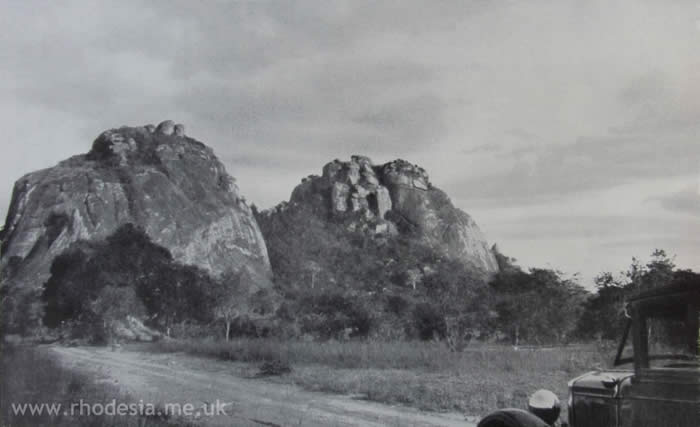 Lundi River Bridge in the dry and rainy seasons 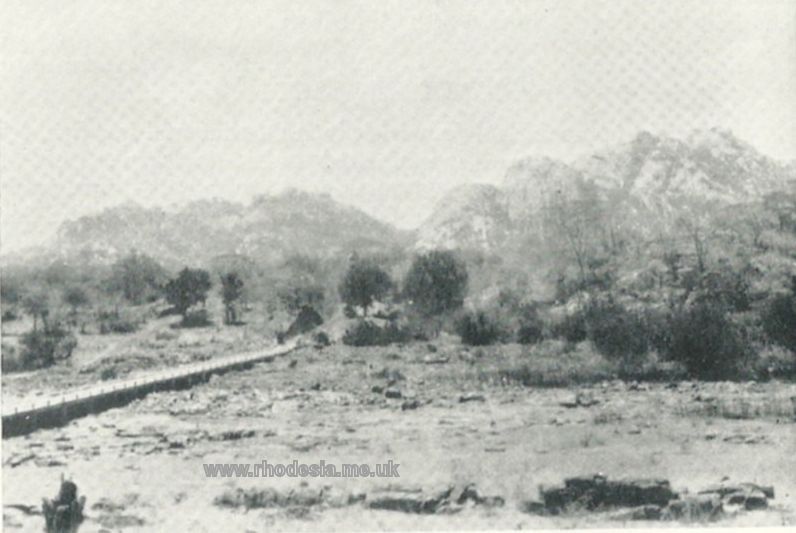 The Lundi River Bridge in the dry season, 1928 – taken from the Lundi Hotel.

From “Fort Vic”, the Lundi is about a third of the way to the South African border across the Limpopo River which at this stage had still not been bridged; effectively confining the road journey to the dry season. Nevertheless the Tokwe, Nuanetsi and Bubye rivers had all been bridged and at this time of year it was possible to motor from Messina to Fort Victoria in one day. 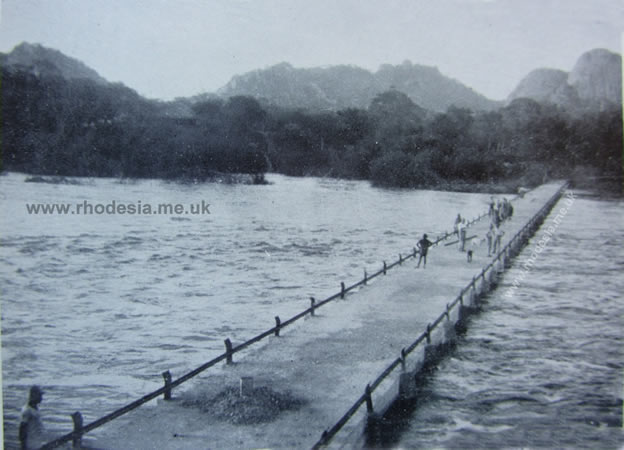 The recently constructed Lundi River Bridge photographed from a similar position in 1928 during the rainy season.  This bridge enabled traffic to pass except during periods of very heavy rain. (photo by S. Rogers) 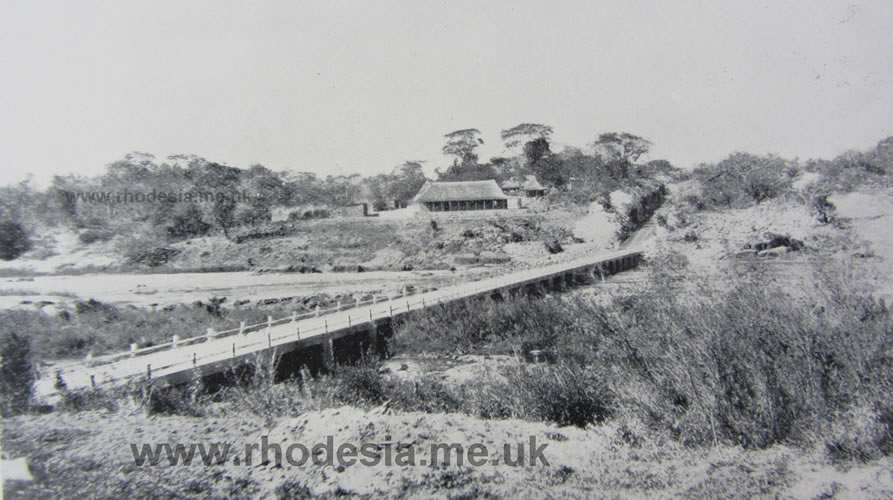 Most pictures of the Lundi River bridge are taken from the south to give the fine view of the granite hills.

Before the construction, much later, of the new high level bridge these photos were also conveniently taken from the grounds of the Lundi Hotel.  Here is a less common photo from the late 1920s taken in the dry season by Lt.-Col. A.J Tomlinson. 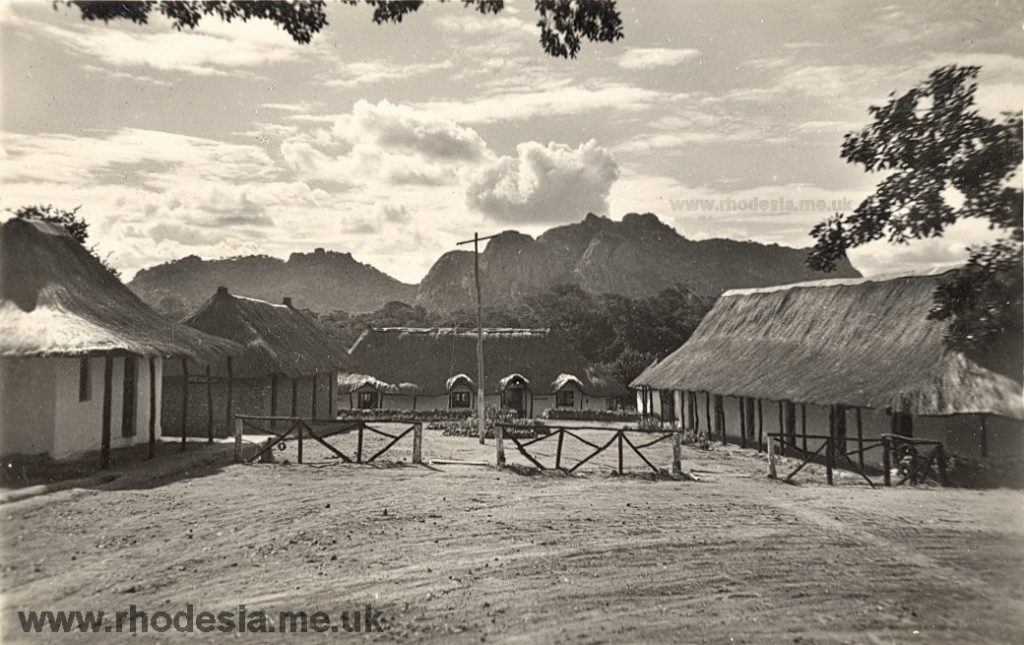 And this is the Lundi Hotel, later known as the Rhino Hotel, right up to the end “lights out” was shortly after dinner when the generator was switched off. 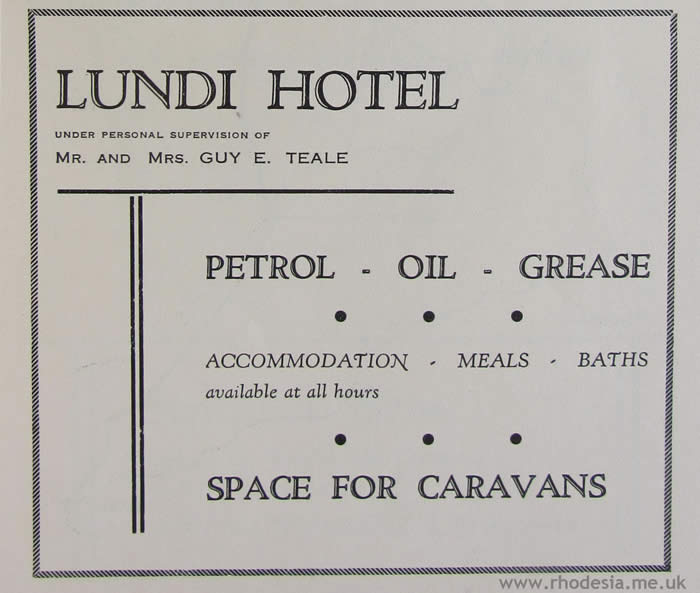 Advert as featured in the AA Route Book for 1937

Lundi River Bridge in the 1950s – the hotel is off the picture at bottom right. 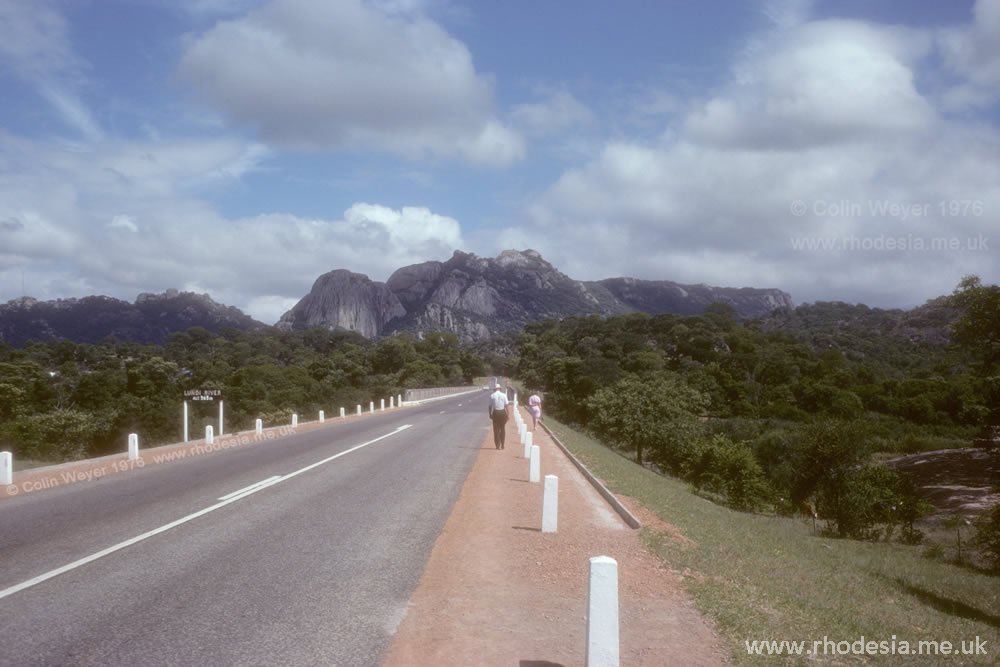 My own photo from the 1970s showing the fine double width highway across the Lundi River high level bridge.

–  not quite the sense of adventure which must have accompanied such a journey before World War II. 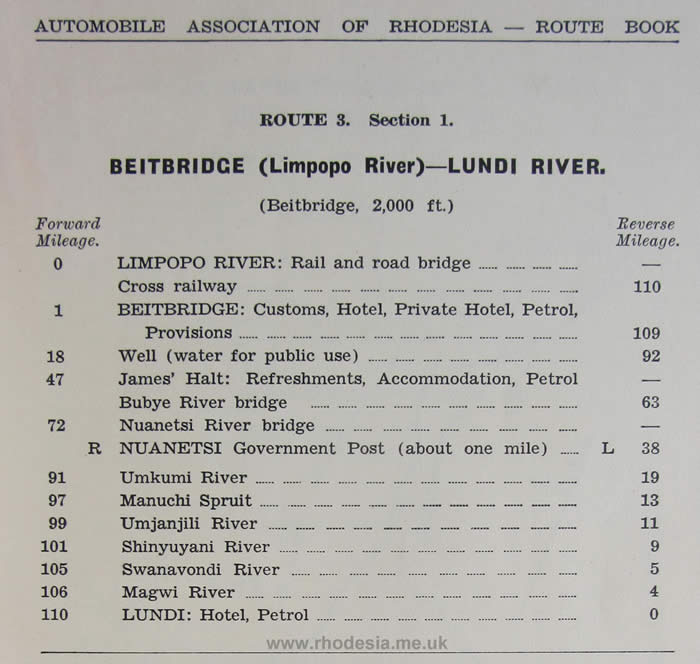 and, below, the route map. 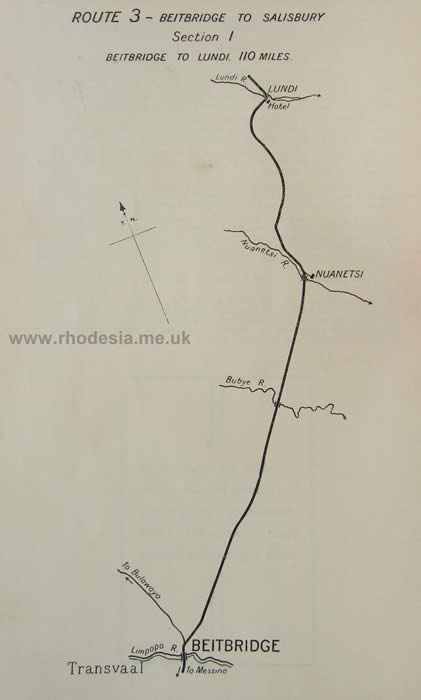 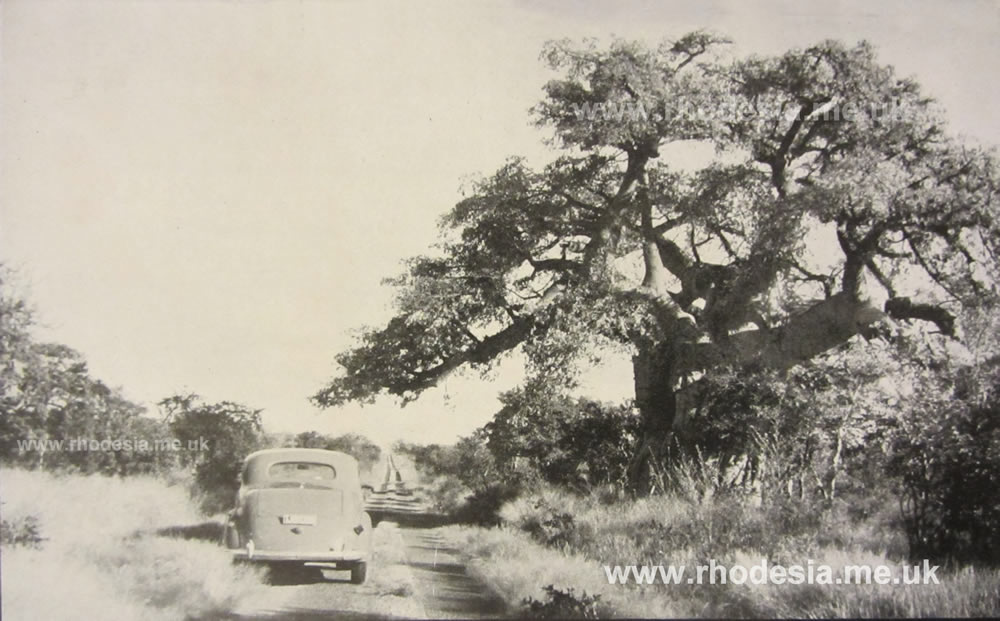 A grand old baobab tree on the road to Beitbridge taken in the 1930s.

This picture is looking south and below is my photo of the same tree taken looking north 40 years later. 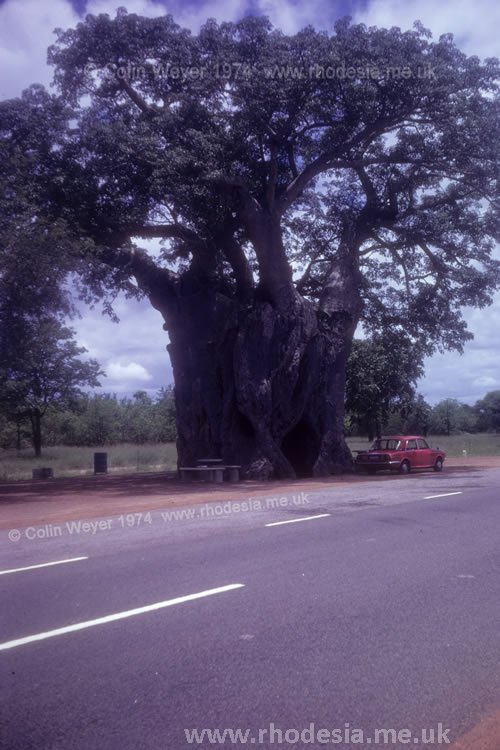 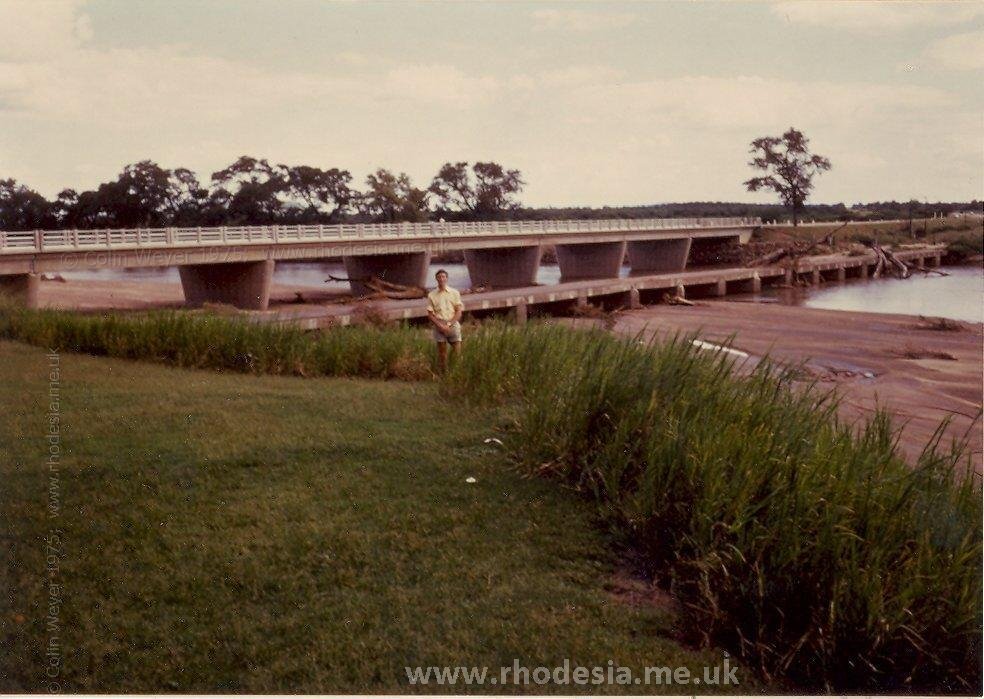 The last obstacle before reaching the Limpopo and South Africa: the Bubye River crossing showing low and high level bridges in the mid 1970s taken from the grounds of the Lion and Elephant Motel. 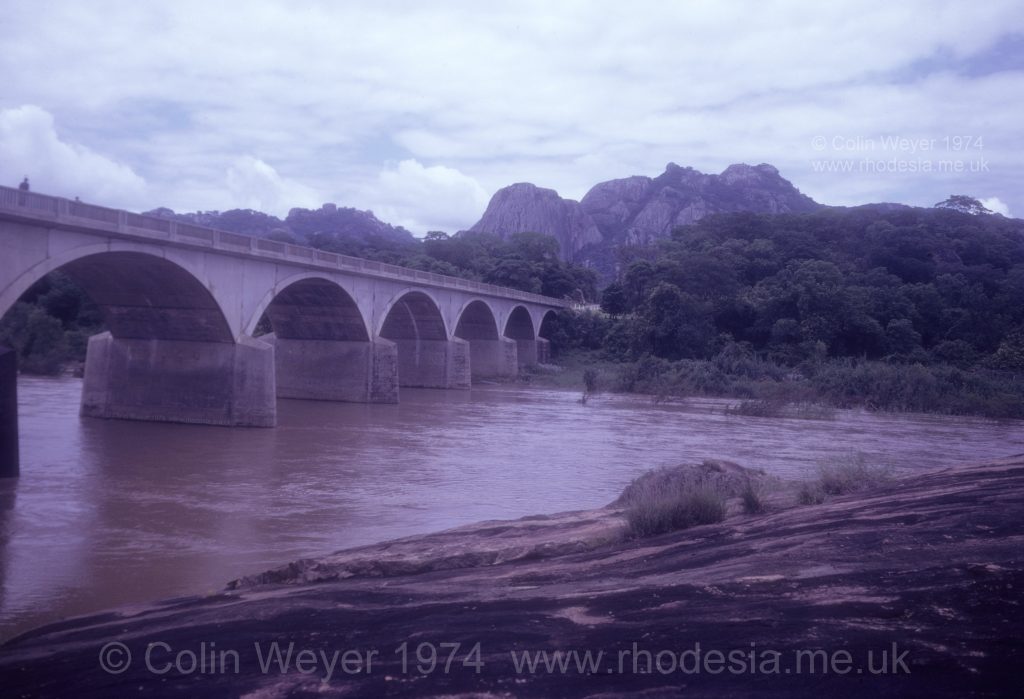 Click below for a 1970s AA Road Report from the RBC