Leaders of Rhodesia from 1890 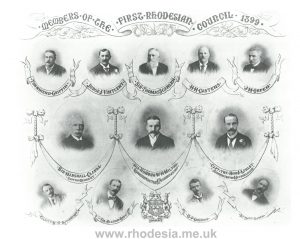 * William Milton played rugby for England in 1874 & 1875 and, after emigrating, he played a key role in promoting and establishing rugby in South Africa.  He went on to play cricket and appeared thrice for South Africa: in the first ever Test at Port Elizabeth in 1889 against England, then again as captain in Cape Town, and finally in 1892.

Opening of the Legislative Council of Southern Rhodesia, 15th June 1903

(Click on the picture, and then again, to get a closer view of the ceremony)

The Legislative Council of Southern Rhodesia 1912

Members of the Legislative Council of Southern Rhodesia 1914

Rhodesian and Union Delegates at the conference to consider terms for Rhodesia’s admission to the Union of South Africa, April 1922

Click on the picture, and then again, to get a closer view of the delegates.

(From an original kindly donated by a pioneer descendant who wishes to remain anonymous.)

The South Africa Act, passed by the British parliament in 1910, made provision for the admission of Rhodesia to the Union at a later date.  After the Great War, the British government agreed that Rhodesia could choose by referendum whether to become self-governing or join South Africa as a province.  The Colonial Secretary, Winston Churchill, favoured the latter course as did Jan Smuts and for similar reasons.  Accordingly a Rhodesian delegation went to Cape Town to discuss the terms of Rhodesia’s admission to the Union. General Smuts was very keen that Rhodesia should join the Union not least because it would reduce the influence of the Afrikaner nationalists.  Smuts offered Rhodesia a very generous 10 seats in the Union parliament rising to 17 as her population increased and promised significant funds for development.  However, concern about Afrikaner influence proved to be a major factor in fiercely loyal Rhodesians deciding in favour of responsible self-government.  In the final vote the Responsible Government cause won nearly 60% of the vote on a 79% turnout.

It is interesting to speculate what might have happened if Rhodesia had joined the Union in 1923.  Clearly a great South African Dominion had been Rhodes’ own dream and how he might have influenced the decision, had he not died at the early age of 49, is a matter for debate in its own right.  However in 1948 Prime Minister Field Marshal Smuts lost the South African general election by a very narrow margin to the Afrikaner nationalists led by Dr Malan.  In fact Smuts obtained more votes than Malan but fewer seats.  The point of interest is that had Rhodesia been in the Union then Smuts, not Malan, would have won fairly easily and apartheid as promoted by the National Party would most likely never have come about.  Instead a policy based on merit, more akin to that followed by Rhodesia, would probably have been adopted in South Africa which no doubt, similar to Australia, would then also have encouraged mass white immigration.  Clearly the question of Rhodesia having to declare its own independence (UDI) would never have arisen.

On 1st October 1923, Southern Rhodesia became a self-governing colony with all the powers and functions of responsible government.  His Majesty King George V appointed His Excellency Lieut.-Col. Sir John Chancellor as the first Governor.

The following is an extract from the speech made by His Excellency at the inauguration ceremony:

“When one remembers the sufferings and hardships endured by the early pioneers, their victories over savage tribes, fighting against overwhelming odds, and their struggles with the untamed forces of nature,; when one remembers the vicissitudes the country has undergone owing to wars, drought and disease, one marvels at what has been achieved by men of British race under the inspiration of that great Englishman and great Empire builder, Cecil Rhodes, I like to think that his spirit is present today, a silent witness of an important stage in the fulfilment of one of his dreams.

The British Empire has been built up of territories acquired by various means – conquest, purchase, exchange. In some cases we have reluctantly been compelled to enter countries to put an end to intolerable conditions, and have found that in the interest of humanity it has been our duty to remain.  Sometimes the initiative has been taken by Government, and sometimes, as in the case of Rhodesia, the pioneer work has been done by private enterprise.  I venture  to say that no territory annexed to the British Empire in the last hundred years has come with a more honourable record than Rhodesia.”

Originally, before the Great War, he had sympathy with Rhodesia joining the new Union of South Africa but later he became an ardent campaigner for self government. In 1917 he strenuously resisted the BSAC plan to amalgamate with Northern Rhodesia which he felt would imperil the grant of responsible government which, through his hard work, was achieved in 1923. He was Premier from 1st October 1923 until his death on 28th August 1927.

He was given the rare distinction of being buried in the Matopo Hills near the Founder, Cecil Rhodes; this location being reserved for those who had “deserved well of their country”.

The hill was referred to by Rhodes as a place where one could get “a View of the World” but the area has long been held sacred.  It was known as Malindidzimu, the place of spirits, by the Karanga before they were conquered by the Ndebele around 1840.  The Matabele however retained the sacred nature of the area and this was then similarly adopted by the whites when they in turn became the rulers of the land that came to be known as Rhodesia.

The Legislative Assembly in 1929

Godfrey Huggins was born in 1883 and qualified as a doctor and surgeon before coming to Rhodesia for what he had intended as a short stay. He became a member of the first Legislative Assembly in 1924. Following a period of uncertainty after the death of Sir Charles Coghlan, and by now Rhodesia’s leading surgeon, Godfrey Huggins was elected Prime Minister in 1933.  He dominated the Rhodesian political scene for the next 23 years.  He was knighted in 1941 and led Southern Rhodesia into the ill-fated Federation with Northern Rhodesia and Nyasaland in 1953.  He was raised to the peerage as Viscount Malvern of Rhodesia and of Bexley in 1955 shortly before his retirement.  He died in 1971.

Mr. A.R. Thomson (Wankie) was not present when the photograph was taken.

The Parliament of Rhodesia in 1939

T.H.W. Beadle was not present.

Members of Parliament and Staff of the Legislative Assembly 1948

(Click on the picture, and then again, to get a closer view)

This photograph of the Northern Rhodesia Legislative Council is included as it shows the young Roy Welensky, who became Prime Minister of The Federation of Rhodesia and Nyasaland from 1957-1963.

He led Rhodesia to independence on 11th November 1965.

Rhodesians of all races are proud of their country and their heritage. This pride stems from their achievements, particularly over the last 70 years. At the turn of this century, the population of Rhodesia was less than 400 000 people, made up mainly of the two main indigenous tribes, namely the Matabele and the Mashona.

With the advent of the European and his civilisation, brought about by the establishment of mission stations in the early days, the administration of the British South Africa Company up to 1923, self government from then on and Independence since 1965, peace and prosperity manifested themselves.

The effect of this European influence was dramatic, and where stagnation previously reigned, civilised life gradually developed to the stage where today the population of Rhodesia is approaching 6 million people.

Modern communications systems link the major centres, greatly facilitating the development and expansion of an already sophisticated economy. Highly developed local government and medical facilities make for the easy administration of the healthy population. Agriculture is the most important industry, and experts have praised some of our farming methods as being amongst the most advanced in the world; we certainly lead many countries when it comes to conservation.

We have one of the finest climates in the world, and the beauty of some parts of our country defies description. We cannot claim any credit for these two factors, but believe they have something to do with Rhodesians being what they are.

The interest Rhodesia has generated abroad accounts for the ever-increasing number of tourists who visit our country every year, and last year some 400 000 visitors, a number comparable to the total population of the country less than a century ago, visited us.

I do not wish to leave you with the impression that Rhodesia is a Utopia. One of our major objectives is the integration of our African population into the economy and the development of his home-lands for the national good. It is my hope that we can achieve our objectives in the air of peace and tranquility which prevails today.

This extract from Veronica Burleigh’s portrait of Rhodesia’s Prime Minister has captured very well his solid and determined personality.

CW Dupont was born in London in 1905 of Huguenot ancestry. He read law at Cambridge and practised from 1928-1948. At the start of WW2 he was commissioned into The Royal Artillery. He emigrated to Rhodesia in 1948. In 1958 he was elected as the member for Fort Victoria in the Federal Assembly and in 1962 was elected to the Charter constituency in the Southern Rhodesia Parliament. In 1964 he defeated Sir Roy Welensky in the Salisbury constituency of Arundel. He was appointed Minister of Justice and subsequently became Deputy Prime Minister. In 1965 he was appointed Officer Administering the Government until, following a referendum, Rhodesia became a Republic. He died in 1978.

John Wrathall was born in England and qualified as a Chartered Accountant in 1935. He emigrated to Rhodesia in 1936 and was Rhodesia’s longest serving Minister of Finance prior to being sworn in as President.  He died in office.

CBE = Commander of the Most Excellent Order of the British Empire

CH = Member of the Order of the Companions of Honour

CMG = Companion of the Order of St Michael and St George

DSO = Distinguished Service Order – for gallantry and leadership in the face of the enemy, 2nd only to the VC (Victoria Cross)

Esq = Esquire; in the UK it is a title of respect previously accorded to men of higher social rank, but which later became a general courtesy title for any man in a formal context.

FRCS = Fellow of the Royal College of Surgeons

G.C.L.M. = Grand Commander of the Legion of Merit  (Rhodesian award)

KC = Kings Counsel; presently, in 2014, QC = Queens Counsel; a senior advocate at law in the UK and Dominions.

KGSt.J = Knight of the Order of Saint John

LRCP = Licentiate of the Royal College of Physicians

MBE = Member of the Most Excellent Order of the British Empire

OBE = Officer of the Most Excellent Order of the British Empire

PC = Privy Counsellor to the King or Queen of Britain, a formal and select body of advisers to the British Sovereign.