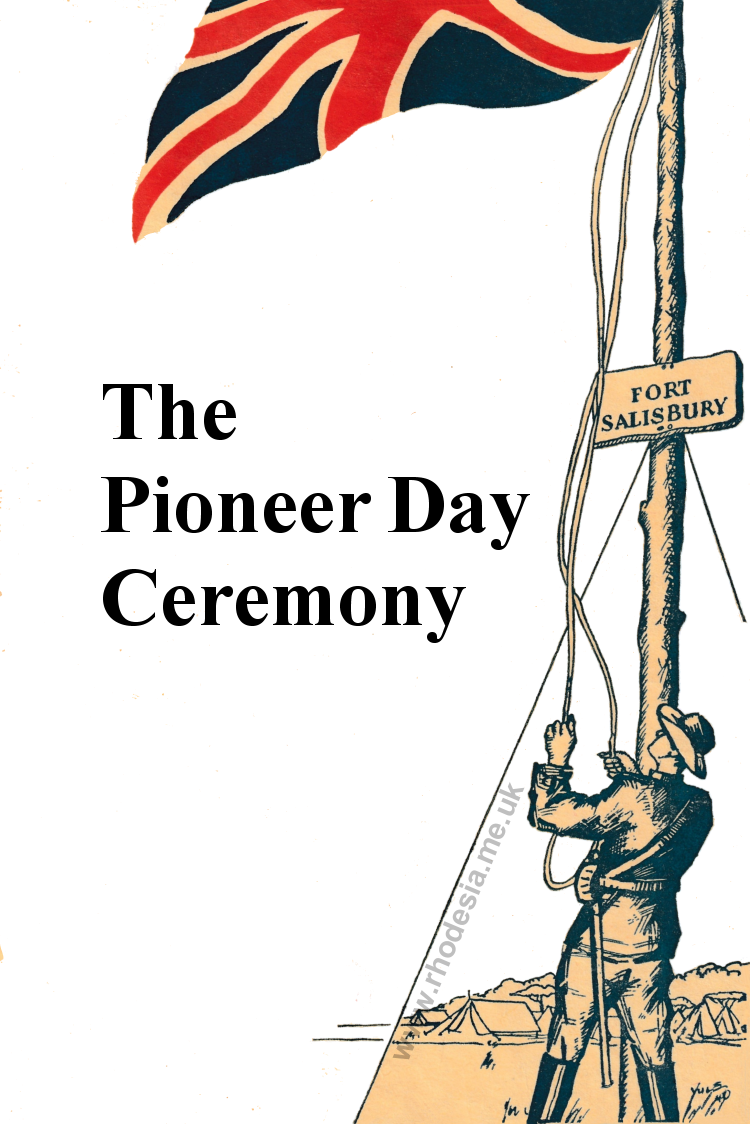 The Pioneer Column, established by Cecil Rhodes’ British South Africa Company in terms of the Royal Charter granted by Queen Victoria, reached what was to become the city of Salisbury on 12th September 1890. The following morning a formal flag raising ceremony was held.

September 12 has become firmly established in the calendar as Rhodesia’s national day on which all Rhodesians recall with gratitude the hoisting of the Union Flag at Fort Salisbury in 1890, marking the end of the march of the Pioneer Column. In fact, September 12 is the anniversary of the arrival of the Column at the site of the future capital city while the ceremony of hoisting the flag took place on the following day, the 13th.

Pioneer Day commemorates, therefore, the events not of one day but of two historic days. The form of observance has after all these years become traditional and it is more than doubtful whether the arguments of historical pedants for a change of date would meet with much sympathy.  Nor can it be said to matter greatly provided that the spirit informing the celebration is properly appreciative of the debt owed to the Pioneers.

It is perhaps not surprising or inappropriate that there is this slight confusion over the dates.  The men most closely concerned did not appear to have regarded either day as particularly significant; to them it was another working day.

Only two of the great company who paraded round the flag on the first Pioneer Day were still alive in 1950 to celebrate the diamond jubilee of Rhodesia’s foundation.  They were ex-corporal J.S. Crawford (of Penhalonga) and ex-trooper T.W. Rudland (of Salisbury) of the Pioneer Corps.  One other 1890 man was still living in the Colony, Mr. J.A. Palmer, of Penhalonga, but he missed the Salisbury parade having been posted to Fort Charter on the northward march.  An honoured 1890 Pioneer who missed the Diamond Jubilee celebrations by only a few months was the late the Hon. Lionel Cripps – the first Speaker of Rhodesia’s parliament. He, like Palmer, was not  at Salisbury on the great day having been with a small party under Dr. Jameson, Selous and Colquhoun which struck eastward from Charter to secure Manicaland for Rhodesia.

There is plenty of evidence that the Column did not regard its arrival at its goal as anything to make a fuss about.  It was a job of work, important possibly but not an end in itself; there was far too much else to do. The Pioneers were practical minded men.  They knew that the establishment of headquarters at Fort Salisbury was just an episode, it did not mark the end of the real task.  To most of them September 30, 1890, the day on which the Pioneer Corps was disbanded and the men were free to go about their own affairs must have seemed more significant.

The bare facts of the two days are clear enough.  They are given succinctly in the extracts from the Pioneer Corps Order Book.  This book was lost for many years and was found in 1935 among some old papers in Salisbury and is now in the National Archives.  Its discovery settled the vexed question of dates on which contemporary accounts varied.

One of the best accounts is contained in E.P. Mathers’ “Zambezia, England’s El Dorado in Africa. Being a description of Matabeleland and Mashonaland and an account of the gold fields of British South Africa“. Mr. Mathers, a London journalist who edited the weekly newspaper “South Africa“, based his account of the march of the Pioneers on an article  by Sir John Willoughby (of the Pioneer Column) in the “Fortnightly” on “How we occupied Mashonaland“.  While Mr. Mathers’ account is not that of an eye witness, he was writing in 1891, immediately after the event and using the evidence of reliable witnesses.

“On the next dawn they moved on under a hill to the right from the top of which Colonel Pennefather saw Mount Hampden 15 miles to the north.  The original intention had been to halt the expedition at Mount Hampden but, it having been ascertained that there were water difficulties connected with that site, the present station was selected and occupied. The Colonel pointed out the camping ground  now called Fort Salisbury.  The Pioneers sauntered on, some in shirts, some in football jerseys and in the most nondescript articles of apparel.  A barrister was carrying a pick, an ex-sculptor an axe and so on.

“Presently the Column was seen about  four miles to the south, rounding the end of a wood.  It was 12th September  and a fresh glorious morning.  Occasionally a stray buck ran across the line of march and away would go the camp dogs.  By 10 o’clock the Column had caught up with the Pioneers and laager was formed.”

Game abounded in the area and Maj. Johnson’s own bag on the 12th was a lion, two teal and a Lichtenstein hartebeest. A few days later he had to forbid the shooting or molesting of ostrich as that was their breeding season.

The fact that the pioneers themselves were not greatly concerned about the date, and indeed, not surprisingly, had rather lost track of time after many weeks trekking through the bush from Fort Tuli, may be confirmed by their confusion over the dates as recounted in some of their own recollections. Selous, writing in 1893, says the flag was hoisted on the 11th. Marshal-Hole writing in 1926, says this took place on the 12th as does Hensman in his History of Rhodesia written in 1900. Frank Johnson gets the dates correct.

American naturalist William Harvey Brown came up with the column and in 1899 wrote “On the morning of September 11th [sic] we entered a magnificent prairie country quite destitute of native villages.  Finally, the column outspanned about twelve miles from Mount Hampden. After a hasty breakfast, the Pioneers went to work at building a permanent fort; and presently we realized that we had reached our journey’s end. More than that, it was not merely a wilderness fort that we began to erect, but the capital of a new empire.

“On the following day, September 12, 1890 [sic] we held a grand parade, and in the name of the Queen, formally took possession of all the unpossessed land in South Central Africa. The British flag was hoisted by Lieutenant Biscoe of the Pioneer Corps.  Canon Balfour offered prayer, three cheers were given for the Queen, a salute of twenty one guns was fired from the seven-pounders, and another jewel was added to the British crown.

“The place was named Fort Salisbury, in honor of England’s Premier.  The situation was on an open prairie, near a small river called the Makabusi.  The altitude was found to be 4,600 feet above sea level and the latitude 17° 54′ South.  It was estimated that we were 1,100 miles from Kimberley, and 1,700 miles from Cape Town. Four hundred miles to the east lay the Indian Ocean, while the Zambezi River was less than half that distance to the northward.

“I know not what others of the Pioneers may have thought or felt on this occasion, but I must confess that on my mind it made a profound impression.  For the first time in my life I felt that I was helping to make history, that I had witnessed  the laying of the corner-stone of what, by virtue of the natural resources and fertility of the country, would one day become a populous and valuable colony.  The vicissitudes it would be called upon to undergo, no human judgement could foresee, but in the hands of the world’s most successful colonial architect, its final destiny seemed a foregone conclusion. It needed no professional prophet to predict the farms, the mines, the towns and cities, the factories and the railways which a few years’ time would be almost certain to bring.

” There is a fine feeling of exhilaration in being present at the founding of a new state, and in five minutes after Fort Salisbury was established, I had made up my mind to stay with the enterprise”

(20 years later, and 10 years after writing this, WH Brown was both Mayor of Salisbury and a member of the Legislative Assembly)

The Occupation was, then, a businesslike occasion with no frills.  Its significance has certainly grown with the years.

The history of its observance is quite a story in itself. Old newspapers in the National Archives bring it to life again.

We find in a cyclostyled handwritten copy of the Mashonaland Herald that a commemorative dinner was held in Salisbury on September 12th, 1891, and this became an established annual event.  In 1898 the anniversary of the Column’s arrival was gazetted a Civil Service holiday. Oddly enough in 1903 it was deleted from this list of public holidays.

That started public agitation.  In 1905 the 1890-93 Columns Association organised a celebration on the 12th: hoisting of the flag at 2 pm followed by a picnic at Hartman’s Hill for 250 children, enlivened by the Chishawasha Mission band.

Next day the “Rhodesia Herald” fulminated: “Yesterday’s doings were evidence that September 12 must live as one of our national days.  It was officially removed from the list of public holidays a couple of years ago and the substitution of Rhodes and Founders Day on July 5 and 6 was not properly realised till this year.

“September 12 we have known as the day on which the Column reached Salisbury and hoisted the flag over the territory which is destined to be among the chief white settlements in Africa.  Sentiment of that sort cannot be killed by mere legislation. The 12th must go on the calendar somehow”.

An interesting point in this article is the confusion over the date, the writer telescoping the events of the 12th and 13th and thus possibly helping to create the impression which persisted for many years that the 12th was the anniversary of the hoisting of the flag.

It was many years before Occupation Day was restored to the calendar but the annual commemoration continued.

On June 19, 1918, the late Mr. M.E.Cleveland (father of the Mayor in 1950)  seconded by Sir Charles Coghlan moved in the Legislative Council “that the Government be requested to declare Occupation Day September 12 a public holiday”.  There was little or no debate, the motion was accepted by the Government and Occupation Day came into its own in terms of Ordinance 14 of 1920..

This in brief is the story of Occupation Day which in 1961 was renamed Pioneer Day. In spite of the fact that at the 1950 diamond jubilee celebration there were present men who took part in the first ceremony, this account may read like ancient history to most Rhodesians today.

They may be interested in this extract from Stanley Portal Hyatt’s  “The Northward Trek”, published in 1909 but still apposite:

“A little romance is a good thing even in the life of a successful man, even the thought of the romance in other people’s lives.  For that reason the story of the Pioneer Column should be remembered for it was all romance.  Had the members of that Column been merely business men they would never have undertaken the venture and the newcomers  would not be reaping the rewards of their work.  It would be well for the Rhodesians of today to remember this and when they look around and see the growing prosperity of their country and try to picture to themselves how much greater the prosperity of the future will be, it would be well too for them to pause a moment and look back and ask themselves how much is due after all to their own efforts  and how much to the men of the past, the Pioneers of the Northward Trek.”

Note that the 1976 ceremony took place on Monday, 13th September; the 12th being a Sunday.

My photos of the 1976 ceremony are shown below (click on images for a closer view).