Grave News about Glaciers – they are disappearing

For many years exact observations have been taken of the movements of glaciers in the Alps.  The results of last year’s records have just been published, and show that all the glaciers in the Rhone district of Switzerland are in retreat, some of them to an extent which may almost be described as alarming.

The famous glaciers of the Rhone have shrunk several thousand feet in the last 20 years; considerably more than 100ft a year.

Except over a small area, it is generally understood, the glaciers of the world are retreating to the mountains. The glacier on Mount Sermiento in South America, which descended to the sea when Darwin found it in 1836, is now separated from the shore by a vigorous growth of timber.

The Jakobshavn glacier in Greenland has retreated four miles since 1850, and the East glacier in Spitzbergen is more than a mile away from its original terminal moraine. In Scandinavia the snowline is further up the mountains, and the glaciers have withdrawn 3,000ft. from the lowlands in a century. The Araphoe glacier in the Rocky Mountains has been melting at a rapid rate for several years. In view of these facts we should not be too sceptical when old men assure us that winters nowadays are not to be compared with the winters of their boyhood.

There is no doubt that the climate has warmed since the end of the Little Ice Age which ended around the early 1800s.  (New York Harbour, the Baltic Sea & most of the rivers in Europe used to freeze over. Winters were bitterly cold and prolonged, reducing the growing season by several weeks. [Not a good time to live] nb Brueghel paintings c1600).  London held numerous frost fairs on the Thames between 1608-1814 when the ice was up to a foot thick. Solid ice was reported extending for miles off the coasts of the southern North Sea (England, France and the Low Countries), causing severe problems for shipping and preventing the use of many harbours. Near Manchester, the ground was frozen to 27 inches (69 cm), in Somerset, to more than 4 feet (1.2 m).

North Atlantic sediments accumulated since the end of the last ice age, nearly 12,000 years ago, show regular increases in the amount of coarse sediment grains deposited from icebergs melting in the now open ocean, indicating a series of 1–2 °C warming events recurring every 1,500 years or so with cooler spells in between. The most recent cooling event was the Little Ice Age. Prior to that there was the very well documented Medieval Warm Period.

Look at this map of Glacier Bay in Alaska. [The melting of glaciers elsewhere in the world follow a similar pattern to that shown here.] See if you can spot when natural melting was replaced by man-made melting? Clue: The UN Intergovernmental Panel on Climate Change (IPCC) says that humans have caused global warming since about 1950.

Then decide for yourself if it is all your fault or are you being dragged into a modern day hysteria reminiscent of the Catholic Inquisitions whereby Copernicus was found to be “foolish and absurd in philosophy” and Galileo was forced to recant and even so ended his days under house arrest?  Similar to today, many scientists were fearful of questioning the official orthodoxy. 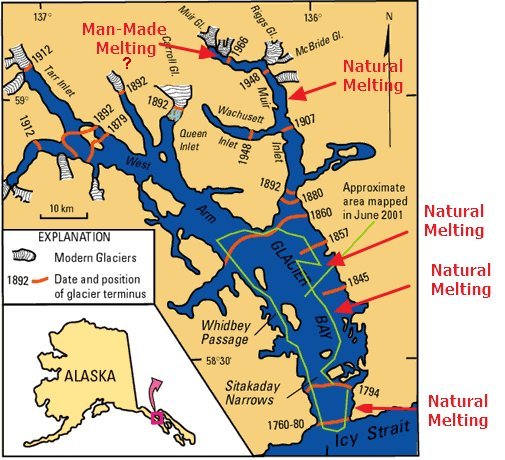 SOME great world change is taking place on the Antarctic Continent. Its glaciers are shrinking.

Commander L.A. Bernacchi, who visited the South Polar land 30 years ago, says that the Great Ice Barrier which fronts the continent with a wall of ice for 250 miles has receded at least 30 miles since it was first seen and surveyed. Sir James Ross, who went out on the earliest Antarctic expedition of the nineteenth century [1839-43] , and those who followed him, left clear descriptions of this tremendous ice frontage and its position. It was a cliff 150ft. high and 1000ft. thick. But now it appears to be continuing its century-long process of shrinking; and that process may have been going on for centuries. It might imply, unless it is offset by some increase of ice in another less explored part of the Antarctic, that the climate of the South Pole is changing and becoming warmer.

The shrinkage of the Alpine glaciers of Europe is a well-known and carefully measured fact. Professor Buchanan, of Edinburgh, drew attention to it twenty years ago, and showed from old and accurate drawings of the Lower Orindelwald, the Rhone, and the Morteratcch glaciers that they were retreating rapidly. This led to the continuous measurement of the Swiss glaciers as well as examination of other glaciers of the Northern Hemisphere, in Greenland, Alaska, and elsewhere. From these measurements many geologists concluded that the northern part of the globe was still recovering from the last of its Ice Ages, of which the more southerly of its glaciers in Europe were a relic. If all the glaciers of the Southern Hemisphere as well as those of the Northern are shrinking, the geologists would have a new problem to examine. It would be whether, instead of areas of cold and ice having shifted on the earth, the whole globe is growing warmer. Even if that could be shown the change might prove to be temporary.