As elsewhere in the world, the climate of Rhodesia has always been changing throughout its history and long before the modern industrial age.

In late 2019 much of the world’s media was reporting the latest “evidence” of man-made climate change as exhibited by the supposedly unusual sight of an almost dry Victoria Falls.

Here is a typical headline scare story from the British newspaper The Guardian of 7th December 2019 (Very similar stories were carried by The Daily Telegraph, The Independent, The Irish Times and Sky News among others):

The worst drought in a century [sic] has slowed the waterfalls to a trickle, fuelling fears that climate change could kill one of the region’s biggest tourist attractions.

While they typically slow down during the dry season, officials said this year had brought an unprecedented [sic] decline in water levels.

“In previous years, when it gets dry, it’s not to this extent,” Dominic Nyambe, a seller of tourist handicrafts in his 30s, said outside his shop in Livingstone, on the Zambian side. “This is our first experience of seeing it like this.”

As world leaders gather in Madrid for the COP25 climate change conference to discuss ways to halt catastrophic warming caused by human-driven greenhouse gas emissions, southern Africa is already suffering some of its worst effects – with taps running dry and about 45 million people in need of food aid amid crop failures.

At best, if true, this story might demonstrate that the climate in the Zambezi River catchment area had changed and become drier. One thing it does not provide is any evidence that man is responsible.

But the Project Fear headline is not true, for further down the article even the Guardian contradicts itself by writing: “Data from the Zambezi River Authority shows water flow at its lowest since 1995, and well under the long-term average.” – ie. only 25 years earlier and not “the worst in a century” and certainly not “unprecedented”!  It also admits that it is not possible to be categoric and that there is always seasonal variation in levels.

And it is hardly surprising that the young curio seller, Dominic Nyambe, “in his 30s” is unable to remember seeing anything like this before; his memory simply does not go back far enough!

Read more to see that the recent drought has been nothing at all out of the ordinary:

Although Rhodesia was not thoroughly explored by outsiders until relatively recently, there is much evidence to be found from the writings of early European explorers who travelled to the region from the 16th century onwards. So, for instance, droughts in Rhodesia are nothing new. In fact it has been said that a drought occurs whenever there isn’t a flood!

In the 1960s Professor of Geology, Geoffery Bond, wrote: “As human beings we have a natural tendency to judge time by reference to our own life span.”

This observation is not just pertinent to geology but in today’s febrile “climate” is also very relevant to the various news stories on recent weather events which are frequently cited as the “worst ever”!   “Severe weather events” – despite the fear-mongering – continue to come and go as they always have.  “Worst ever” or “highest ever” usually means within the lifetime of the reporter or his satellites; with very few of the latter existing before the 1970s.

“North of approximately [the Tropic of Capricorn], the land falls under the influence of the seasonal monsoon winds (which at sea can form powerful typhoons) but even here rains are irregular and the country can be subject to droughts which may last years. These droughts were, and still are, profoundly disruptive and can bring with them famine, epidemics and locust swarms. Although rural communities have traditionally had strategies for dealing with famine, these are seldom sufficient if the drought lasts over two years.

Drought and famine punctuate the history of Mozambique and have profoundly influenced its development, as a few examples will illustrate. The famines of the 1570s and 1580s coincided with, and possibly caused, the Maravi invasions [of present day Malawi]. A hundred years later famine and disease weakened the settlements of the Portuguese on the Zimbabwe plateau prior to their expulsion in the 1690s, and the environmental crises of the 1760s severely affected the Monomotapa state [later a part of Rhodesia] and the gold trade of Zumbo.”

The great drought of the 1820s

“The beginning of the cycle of droughts which affected south eastern Africa from Zululand to Lake Malawi started around 1794 and lasted till 1802. A further dry phase began in 1817 reaching serious proportions in Mozambique in 1823 where it continued with relentless severity until 1831 but did not finally come to an end until 1836. Portuguese reports describe the devastating consequences for the population of drought and famine exacerbated by the outbreak of smallpox and by the arrival in 1828 of swarms of locusts. In 1828, for example, it was reported that the prazos [farming estates] had become ‘complete deserts through famine and the pestiferous smallpox which has reduced the villages of the colonos [Africans] to mere depositories of corpses. Later that year swarms of locusts invaded the region and ‘day after day the sun was covered by the passage of clouds of these insects and they destroyed even the virgin bush’. The story was the same along the whole coast from Delagoa Bay to Cape Delgado. In 1831 it was reported that 1,000 people had perished on Ibo Island; villages were deserted and the troops too weak to stand sentry duty.

Drought was a common circumstance for the peoples of south-eastern Africa but such a prolonged dry period completely destroyed the economic base of traditional society, not just on the Zambesi prazos but in all the neighbouring communities. Trade, gold mining and normal artisan production ceased and the gold fairs at Manica and Zumbo closed and were abandoned. The waters of the Zambezi fell to such a low level that many of the streams of the delta had no water and became overgrown with bush. The social and economic structure of the prazos was destroyed as agricultural production and trade ceased and the destitute inhabitants abandoned their villages.”

The water flow along the Zambezi above Victoria Falls has been measured since 1907. At this point, unaffected by man’s interventions such as the Kariba and Cabora Bassa Dams, the Zambezi remains in a similar natural state to that found by Livingstone in the 19th century.

Here is a graph showing the annual flow for 100 years.

Historical data provided by the Zambezi River Authority, which monitors the water level flows in the region daily, provides evidence that the annual mean water levels of the river have in fact been lower on at least six occasions from 1914 to 2020.

As can be seen, there is no clear trend such as might be expected from the stories of man-made global warming. In fact the much discussed low level of the Zambezi in 2019 was replicated in 1915, 1949 and 1996!  Whilst the historical records, as summarised above by Prof. Newitt, demonstrate that the Zambezi around 1830 was almost certainly suffering from a lengthy drought far more severe than anything which has occurred in the last 100 years or so.

Finally it needs to be noted, for the benefit of those who have not lived in Rhodesia and are not students of its climate, that the Zambezi is also a seasonal river. Low water, almost to the point of drying up on the Zambian side of the Victoria Falls, is seen every year at the end of the dry season around November. The following photos show this very well.

The Zambezi River Authority graph below shows the 2019/20 season compared with many earlier years and also the long term average. The tales of gloom and doom from December 2019 have past and 2020 proved to be an above average year. The media of course lost interest in this side of the story – enough said. 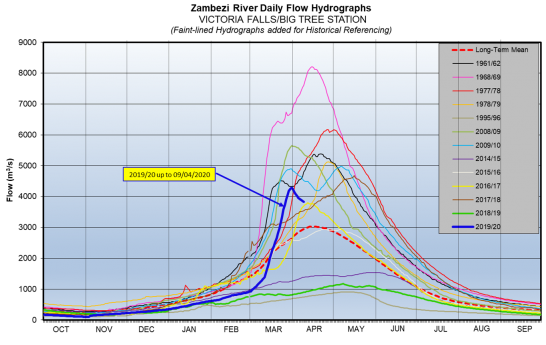 In April 2020 the Zambezi River Authority stated that: “flows at Victoria Falls have continued to increase steadily, peaking at 4,289m3/s on 31st March 2020 before dropping to 3,825m3/s on 9th April 2020. Last year on the same date, the flow was 896m3/s. The Zambezi River flows at all stations including the Victoria Falls are well above the long-term mean.”

To finish here is a short video clip of Victoria Falls which I received in April 2020 from a geologist friend, Julian Misiewicz,  showing the current healthy state of the Zambezi River!